I usually go out for an early morning walk after 1st light, and since we’ve been eating  a lot of fruits and veggies I have lots of trimmings and peals and since I’m used to saving all of that for the Senor’s chickens it just made sense that I could find a needy flock here.  I didn’t have to look to far. But I was concerned that the man preparing his coconuts for the day where i located the flock would think I was just dumping garbage.  But he knew exactly what I was doing and even called the chickens for me.  It wasn’t anything like chick,chick,chick.  But now they expect me and just come even when I call them.  They are becoming bilingual! 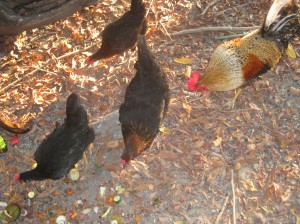 Signs were posted around town about the “Birthday Bash”  so while the Senor glued himself to NFL playoffs at a local watering hole I went to the birthday/charity event.  It was quite pleasant even though I felt like quite an outsider as I didn’t know a soul when I arrived, but that was soon remedied.  I purchased one of Owen’s books, “Dog Gone” and he was gracious enough to sign it for me, I had previously read his “Prisoner in Paradise” which has since been passed on to friends.  I listened to some very good musicians, heard some local tales. 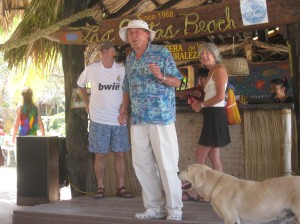 Following the event I took my kindle to “TA TA’s” restaurant on the beach for a couple of mango margarita’s, absolutely yummy with a good book, kind breezes and a continuous parade of life going by.

And now as I sit on my balcony the music from the Sunday evening events at the Zocolo drift my way, a great end to a great day.  Signing off KO