Yesterday was one of those great days.  We took the bus out to Playa Linda and then the water taxi to Ixtapa Island for some snorkeling and picking up shells. nI find lots of the small ones there.

We had oysters for lunch and then I took some of the tortillas out with me to feed the fish.  The fish then swarm around you, big ones about 12 inches tiny ones, blue neon ones, stripped ones, plain one colorful ones it fantastic, you are eye to eye with a whole under water world. Should have had an underwater camera.  We swam and arte and drank beer and sangria and headed back to town on the last boat off the island about 5 PM as we came back to Playa Linda.  One of the Mexican gentlemen on board said it was close to the time for the Playa Linda Flyers.  And something about a pole.  We could see the pole and being from the northwest we were thinking of pole climbing like loggers.  We then saw 5 men in colorful elaborate Mexican Indian dress standing 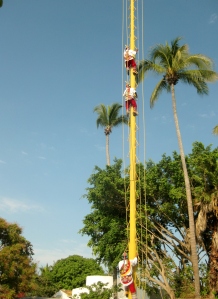 near the pole, so in fractured spanish I asked if they were done and basically the reply was” no crowd. ”  We figured out they hadn’t gone up yet, we asked when and they said now for 100 pesos (about $10 a little less with the exchange)  So up they went climbing up the pole on metal loops . At the top they sit on a platform and begin to turn and spin the platform while playing music on a flutes doing so winds the rope that is attached to their feet around the pole, then one gets on top of a drum, on top of this platform, that is on top of an 80ft pole and dances on the drum and the others begin to unwind the rope which is tied to their feet.  They descend to the ground flying out and rotating around the pole.  Colorful, spectacular and we gave them the 100 pesos and tipped them enormously more.  They were simply great. 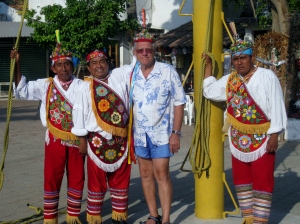 Our plan then was to return to town, pick up some roasted chicken from one of the many chicken sellers, take a siesta and maybe venture out later for a snack.  But as we were passing the Flophouse Bar our neighbors Dwight and Lynn were there and we stopped to have a drink with them and then we remembered that on Tues. night there is music there with Machete Eddy.

So we decided to stay and listen and besides margarita’s were 2 x 1.  Machete Eddie was good, but Allen from Pacalo’s (also from Belfair) came in and also played until it was time for him to go to work at Pacalo’s and he is great. 4 margarita’s later it was time to go home after all we were still in our swimsuits, very tired, very relaxed, slept like babies a truly great day.  Signing off KO