Since the pool has been closed this week I’ve been walking each morning.  This morning I set out just at dawn to catch the sun rise and the activity at the fishermen’s beach. This is Zihuatanejo as it has been time immemorial.

Mexico doesn’t geat more real than this!  I watched as the night fishermen unloaded their catches and the local folks came to haggle over prices. Other fishermen were throwing their nets close to the shore to catch surf fish, other boats were headed out with paying clientel hoping  would befor a trophy catch.

As the sun rose it became obvious this would be stellar day, perfect day for the long delayed  beach day. It was also maid day in our building so it was also perfect timing to be out of her way and on our way.  The Senor and I did breakfast once again at the retaurant which we have yet to learn the name of at the corner of Cuautemoc and Nicholas Bravo. They have a half dozen tables out side and a few more inside air-conditioned. As before breakfast and service is great.

Now on to the beach after much discussion of bus or cab the 6 of us elected to take 2 cabs to La Perla. Our friends had been there before this was our first time.  We tend not to be La Ropa people for the simple reason that I like to swim and/and or snorkle. La Ropa beach is great for bobing in the water and bouncing in the waves, but te skidoos and the parasail boat make me too nervous to really swim.  It is a great lay on the beach and watch the people area. 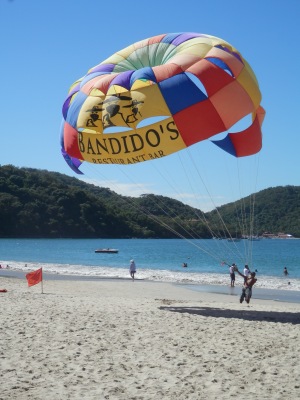 This was our first time at La Perla and we learned that the price had gone up to 100 pesos for two lounge chairs and an umbrella up from 80 pesos that our friends paid last week. As their were 6 of us we opted for a free table under a palapa which served our needs very well.  All in all we had a great afternoon, I bobbed in the waves, floated on my back, and thought I might find enough waves to practice jumping into them, but the surf was low. To my way of thinking our waiter gave us poor service, but others in our group thought it was pleasant that the wait staff left you alone and didn’t bother you. Just a different point of perception. Signing off KO