For anyone who has ridden the water taxi to Playa Las Gatas, you  could not help but notice the the large Greek looking building  high above above Playa La Ropa, nicknamed “The Parthenon”. I’ve always heard that if you tip the security guard you could gain entrance and see where the rich, famous and infamous used to come and play. This edifice to excess was once the seaside retreat of a very corrupt Mexico City Chief of Police, who while in office only 6 years managed through many nefarious activities to amass such a fortune that he needed to invest and spend it somewhere. Of course he was eventually caught and imprisoned where I believe he died.

I hiked up there from El Centro on Saturday and was told manana.  I tried again today, this time with success. The security personnel turned out to be a young man with his wife and children allowing people entrance for 50 pesos. Well worth the admission price. And well worth the all up hill hike.

As you enter through the enormous gates your attention is directed  to a cage where a lion used to reside.  If I spoke Spanish I sure the young man would have given me a personal tour and maybe more of the history, but I was quite content on my own to prowl.  The statues and pillars of the inside court yard are tumbled and in ruins, but it doesn’t take much of an imagination to realize what a beauty it once must have been.

condition on one side and wall paintings on the other side, straight ahead is a  tall fountain falling into a small square pool and beyond it is the most  breath taking view of Zihuatanejo Bay, the entire front of the first floor is open to the bay with gentle breezes cooling the air. The floors are all polished marble. There is

only one of the two long wide marble dinning tables remaining where guest would wine and dine.   There is  narrower one for serving or drinks  You can see where a bar would have been  with painting behind it and a mirror.

Upstairs there is a balcony hallway off which are 5 large bedrooms, each with a private bath, huge well designed closets and mirrors and paintings  on all the walls.  Even mirrored  ceilings. All would had the same breath taking view of the bay with probably shutters instead of windows. Sadly everything is in deplorable condition.The wood work through out was ornate, large wall mural paintings on many of the walls are all indication of former grandeur, but in very sad condition.   I’m amazed that before it fell into such ruins that it wasn’t taken over to be a museum, art gallery or some sort of tourist site to the benefit Zihuatanejo. There probably is a story here somewhere

Wide steps lead down to the large pool area with a gazebo of sorts that I’m sure also served as a bar. Here are more statues and a few plants remain, but at one time I’m sure the grounds were quite elegant. There were steps to a basement, that probably had a wine cellar and an outside entrance/exit from the basement to the pool area. Quite possible used mostly by servants. A fascinating glimpse into what was once the world of luxury. Signing off KO 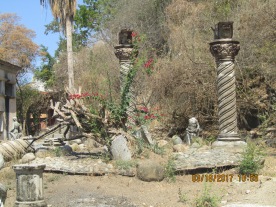 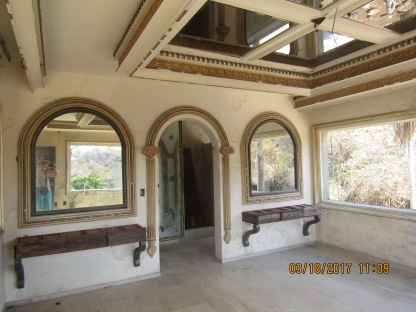 5 thoughts on “A Visit to the Parthenon de Zihuatanejo”