As I headed out to the swimming pool this morning, I thought it is a long walk and taxi’s are cheap, but then I saw what reminded me of why I walk everywhere.  You miss out on the small stuff, the stuff that makes you say ahh! On the main drag, Benito Juarez a car was half in the road way.  Why I do not know why but the back-end definitely stuck out into the driving lane and the front end not so much. There was a group of 5 or 6 men

were around it actually lifting the back-end to rotate it out of the roadway.  As I was madly attempting to pull my phone out of my pack back they had successfully move the back end and now weretackling the front end.  Now at home someone would have a AAA card or someone would have called for a police impound.  But in Zihuatanejo

Just before I reached the pool there is a large vacant lot that is fenced off from the road with a chain link fence. Stuck in it was an old palm tree branch.  What makes this branch 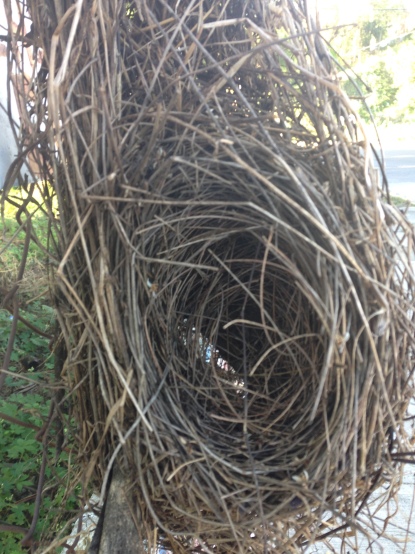 special is there was a bird’s nest still in it.  A family once made this their home. I hope they moved on before it fell.

A couple of days ago I went to an “electronico” store as we left at home a cord to a light fixture that we wanted to put under the kitchen cabinet.  In my fracture spanish I asked if they had one and showed her one similar.  She searched her drawers with no luck then went for her phone and called someone.  I know just enough spanish to know she had sent for help and I was to wait.  Moments later a small red car rounded the corner, an employee ran out to meet it and cord was quickly changed hands to the employee.  45 pesos later I’m on my way with a home with new cord.  No drug deal was ever transpired quicker. LOL