La Chole is a small community about 20 miles out of Zihuatanejo where an ongoing archaeological site is still being studied.  They have a pyramid, and a ball court and many artifacts from the Aztec era that can be seen in the small museum. As an event was

planned there I decided it would be an excellent location to experience the celebration of the first day of spring with some ancient history.

Six of us set out in the pre-dawn light to catch the bus to LaChole, well as close as the bus goes which is dropping you off in the middle of nowhere just off the highway where we planned to catch the local passajara.  But a car stopped and offered us a ride into the pyramid.  We cheerfully accepted. Saving us much hot waiting time. As we arrived at the pyramid the ceremonies had already started and they were bringing folks to the top of the pyramid in

groups of 20. Once on top we were told of the significance of the different areas. As my friend Brenda is Mexican she could translate for us.  We were about the only gringos there. As we came down the pyramid there wre more ceremonies, with smudging and storytelling done with great pride and emotion.

We then moved on to the town for food drink and to watch traditional dancers. I could

have had Iguana stew, but knowing it is illegal to kill Iguanas I opted not to.  The dancers performed regional dances from different eras. It was very colorful and beautiful to watch.  Brenda opted to be blessed 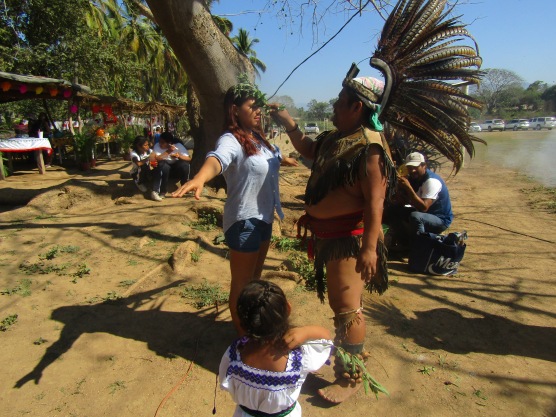 Brenda being energized and blessed 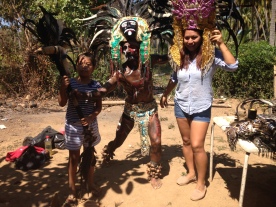 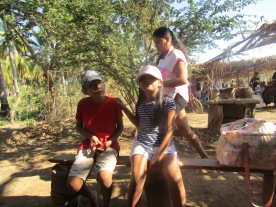 Erica with her new friend

and energized in a smudging ceremony, and both she and I posed with the authentic headdresses of the Aztec dancers.  All in all it was a great day a wonderful way to celebrate spring. Signing off KO

4 thoughts on “The Vernal Equinox at La Chole”