I’ve been not at my best the last few days as I have been hit with with one of Mexico’s famous intestinal disturbances.  Actually ill one day with chills and probably a fever all symptoms point to it being viral and not food borne. Slept for 24 hours, feel fine now but still have a intestinal issue.  This should have posted a couple of days ago.

Last Wednesday Morgan and I visited La Chole the small Mexican village where an ancient Aztec civilization once flourished.  I have been their several times but this was a big thrill for Morgan.  By asking friends we were able to secure a taxi driver who spoke good English and was able to share lots of local information with us  I highly recommend Guillermo Otero.  He has a nice large air conditioned taxi and was very personable and informative. Originally there was to be 4 of us, but early the morning of  the tour Guillermo call me to let me know his friend from the village had called him to say it was not safe to come that day as their had been trouble on the road near by with a bus and  a garbage truck having been set on fire.  Of course we canceled and were thankful we had a  guide with good contacts.  These things don’t happen often but it’s wise to avoid trouble when you can.  By the time we rescheduled we were down to just 2 of us as Morgan’s co worker had to work the rescheduled trip day and my friend opted not to go.

As we set out 9ish that morning, our guide asked if we minded making a quick stop in a village called Coyacocoyul which I’m sure isn’t spelled correctly, to make a stop for some special cookies.  His wife is from this village and her very large family still lives there occupying many of the homes on one street.  He picked up his package of warm home made cookies and shared them with us and we were off to LaChole.

First stop was the museum, where our guide had arranged for Jose to meet us and conduct the tour.  Jose was born and raised in the village and his family discovered many of the artifacts that are housed in the museum.  His heart and soul are in this project, he is very proud of his knowledge and loves to share it with you and answer all your question and his English is OK, because all the signage is in Spanish even though our taxi guide told us that it is primarily Canadian and American tourists  visiting the museum.  He said Mexicans visiting Zihuatanejo don’t go out there, all they want is the beach, beer and the bars. It would be a create project for someone to produce at least a printed guide book explaining the different exhibits.  With out a guide you would not understand the significance of what you are viewing.

After the museum, we move on to the ball court and then the pyramid.  I had been out in 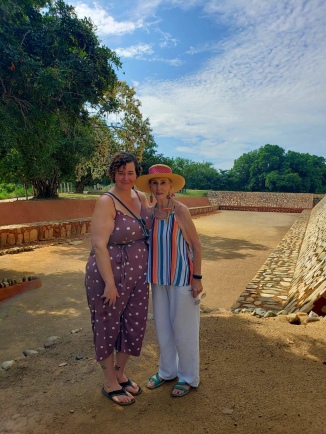 this area 15 years ago before these ruins were unearthed, the fellow told us then that there was a pyramid and they were working to uncover it I really wasn’t sure if he knew what he was talking about, but the locals have known forever.  There area few, very few archaeologist still working out there as there is still much to discover, but progress is slow, money is tight and some of it is on private farm land and can’t be touched.

Our guide Jose next took us into his village and to his home where he showed us his private collection of artifacts.  Morgan was in 7th heaven getting to hold these ancient relics in her hands.

It was a great day and a trip I highly recommend taking the time to visit this interesting bit of history. You can hire a taxi or take the bus to Las Achotes and then wait for the passaherra to take you to the site. 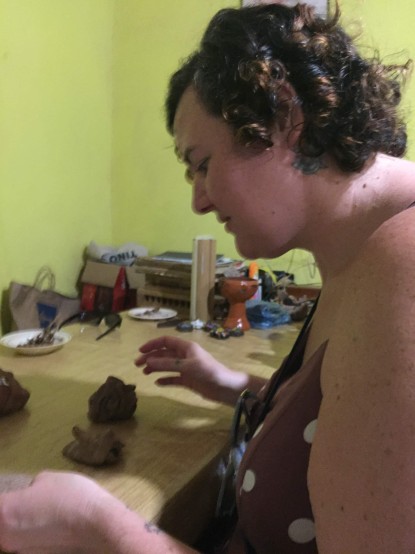 Morgan is having cigars rolled for her and is touching ancient artifacts, oh happy day! Signing off KO