I don’t believe there has ever been a year more anticipated and more welcome than 2021. Like we all thought everything would miraculously right itself over night. We knew it wouldn’t be overnight but we sure hope and pray for some real changes to be on the way.

The only changes I can be certain about are the changes I can do myself. I have become a bit lazy, watching too many movies, binge watching seasons of shows and reading late into the night. So New Year’s day I did my own version of a “polar bear plunge” and took myself to Playa Madera at sunrise to do my first swim of the year, well it was just after sunrise, 7:00AM and the water was as warm as a bathtub. I guess the real challenge here was just getting to the beach that early.

Today I walked my laundry up to the “Lavanderia” at the Kyoto Circle and then continued on to Mega Soriana with my cart to pick up a few supplies. The walk is lovely along the “Parque Lineal”, dotted with playground equipment, benches and lovely plantings. Seeing this lovely long park gives me hope that something as inviting as this will be created along the waterfront. I probably should have walked back also, but walking with a mask on challenges my breathing so I wimped out and took a cab back.

My next improvement project is trying to out smart a little black cat that has decided that my potted plant on my balcony should be his person toilet. The plant is surviving, but not thriving and I think black kitty has something to do with this. I found a few rocks and put them in the planter and added wire scrubbing pads. I assume this will not be pleasant for him to try to dig and scratch in. This isn’t exactly a concrete jungle around here there are several nice dirt patches down the alley he avail himself of.

New years 2018 has to be some of the biggest crowd Zihuatanejo has ever seen. And from my point of view the best behaved New Years crowd hands down, I’ve been to private parties with more over drinking, pushing, shoving and squabbling than I witnessed last night.

The night was warm with a bright full moon already decorating the sky as folks strolled through the streets, some on their way to dinner at restaurants, many just out strolling and socializing others, selecting street food and a blanket on the beach. There were young people, old people, children and babies. Teenagers in groups, tourists both, gringo and Mexican nationals, lots of Mexican Nationals.  Part-timers like us socializing and resuming friendships from past. Everyone enjoying the balmy night and anxiously waiting the start of the fire works. The sidewalks and streets of El Centro were jammed with people and the restaurants kept expanding as one more white table was mysterious pulled from some back hideaway along with a set of chairs to accommodate another family wanting to dine there.

Music was everywhere, large speakers at the Zocolo made sure everyone could hear music whether they wanted to or not. Every bar had it’s own music, bands, recorded music and then of course the strolling street musicians.

At Daniels, where we were it was  the great Jimmi Mamou.

About 11:30 folks  began setting off their own personal fire works, mostly firecrackers and anything that makes horrible noise.  At the stroke of 1200 midnight the firework displays began from Playa La Ropa, Playa La Madera and Playa Principal simultaneously.  The sky became one color burst after another, going on and on and on.  Fantastic! When it was over the crowd moved off the beach, some going to dance at the Zocolo other headed back to their lodgings, us back to our apartment.

There was no officials to direct traffic, no “in and out” lanes, no one checking for bottles or weapons, no children or small dogs were trampled. Everyone just seemed to move on to where they were going in a surprisingly orderly fashion, especially considering we were elbow to elbow with folks going in many different directions and a large

portion of them celebrating with some form of alcohol.  Zihuatanejo was on her very best behavior!  Happy New Year to all. Signing off KO

Zihuatanejo is much quieter now that the Mexican tourists have returned  to their homes. The morning path to La Madera is no longer crowded with the health seeking runners, soon to be replaced by different tourists as more and more American and Canadian visitors arrive fleeing from the cold climes.  I often have the feeling that here in Zihuatanejo if you are willing to work, there is work to be found.  I marvel at how hard the lady who cleans the path to La Madera works, it’s not a glamour job, but it’s honest work and one whose labors we reap the benefits of.  I’m amazed at the piles of  sand she sweeps off the path, and the wheel barrows of litter she removes each day. Same with the daily street sweepers who appear early each morning and clean up the careless, thoughtlessness of others. Definitely unsung heroes!

My gentle little street dog was not at the bridge to meet me this morning, I don’t think I’ll tell her that I gave her breakfast to a friendly street cat. Actually “Luna” is not a true street dog as she does have an owner and a home, but I doubt she is being fed a High protein

Science diet formulated for lactating mothers.  She belong to the coco man who owns the chickens I feed.  There are many street dogs here vying for scraps from the garbage sacks or the kindness of strangers. There are  many of the yellow “anywhere” dogs of which Luna is one.  There are many of very questionable parentage that have produced some very odd-looking dogs.  The one common trait they all seem to share is a gentle nature. 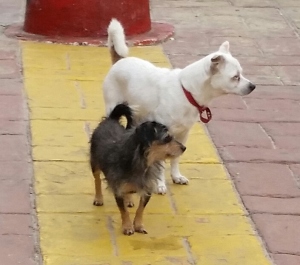 Cats tend to be roof cats, traveling blocks without touching ground. But also found  along the fisherman’s walk, and the occasional shop cat.  We have planters anchoring each end of our balcony which tends to attract the roof cat population cats for their nature calls. We know as we see kitty tracks across the balcony,  and occasionally , in the wee hours of the morning we have even heard their loud discussions. Just before day light last week I heard a cat on the tile overhang just below us, my flashlight has a laser light on it and I couldn’t resist a game of laser tag . But the laser scared the hell out of this cat. She ran as I chased her with the light.  She didn’t understand what a fun game it can be.

There is a curious library kiosk in the artist park, it looks quite similar to the one just erected on the campus of the college I attended, with the main difference being this one is locked up tight and the one at home is open for anyone to take or leave a book.  Maybe it is used by the school once the children return to school?

Today is 3 Kings Day, I’m not sure if it is a true holiday or a day of celebration, I don’t know if the children wake up to their gifts or if it happens later tonight. But I’m curious to find out. Signing off KO

The fireworks display last night was the best fireworks display I have ever seen and it came as quite a surprise. The Senor had gone to bed early the results of a hard day watching football with his cronies. I was on the balcony watching a movie with my earphones so as not to disturb anyone, when the fire works started with what appeared some smaller one down at the plaza 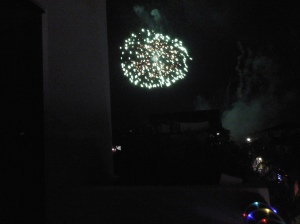 where the usual Sunday event was going on. Then the fireworks began in earnest! Huge bursts one right after another, actually on top of each other.  The sky rained beautiful colorful starburst and kept going on.  A far better display than my town does for July 4th.  Thank you Zihuatanejo. At the end of the show the people started leaving the plaza and our street became wall to wall people, I have no idea how many people attended, but it looked like the whole town plus all the tourists.

Yesterday when I went to swim by boat was gone, the”La Raya ” had left and only the mooring buoy was there. Not a great land mark to swim to as there are small swells and some times bigger swells and then I can’t see it and I’m a bit direction-ally challenged anyway.  It’s just a lot more stopping seeing where you are, and changing course. I will admit lap swimming in a pool is much easier, but I’m ready for the “Sharkfest ” swim in Troncones  Saturday the tenth.

I have learned that the children here get toys on “3 Kings Day”. La Playa bar, where the Senor enjoys his football games, is doing a toy drive.  The Senor and I will pick up some toys today to add to the collection.  My understanding is that the toys will then go to the bomberos for distribution.  Last night I met a lady who is going to help distribute the toys and am hoping I can meet up with her afterwards to learn more about it. For the last several years we have brought a dozen or so boxes of colored pencils and sharpeners to be distributed to children in the poorer schools. And of course we are big participants in the “Sailfest” activities when it rolls around in February. We feel like we are enough of the community to want to participate when we can.

Had to laugh as I walked by the museum the other morning, which has iron bars on every door and window, none the less they also have a security guard on duty.  Having worked many grave yard shifts when I was working in corrections, I could sympathize with him how difficult it is to stay alert when absolutely  nothing is happening. I would just suggest a less public place to rest.  Signing off KO