One of the pleasures of being a pedestrian in Zihuatanejo and varying your route from time to time is running into unexpected visual treasures.  They may be in the form of architecture, flora and fauna, or wall art. One of the problems of being a pedestrian is that at times you feel like a visual target for the Mexican motorists,or maybe just open season on gringos. Anyway to avoid a particularly problematic street crossing I decided to adjust my route back from the swimming pool and that’s when I discovered this lovely street art. The long wall is actually the far side of El Pueblito, the others are located at the front side of  El Pueblito just past their big wood door. 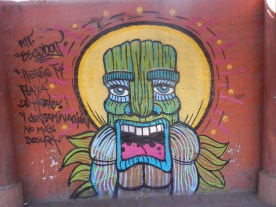 places with. Bonny and I did Ixtapa Island.  It is one of my  most favorite beaches as I can swim out and around where the sail boats moor and then go snorkeling on the other side of the island  where the fish are beautiful and plentiful. On our return we watch as a generous fisherman was feeding the pelicans.

We visited ChulaVida yesterday with our friends and neighbors Will and Sylvia.  We had been looking forward to this trip as it always is a bit of an adventure. We bused to the airport and planned to wait their for the pasajera for the trip along Playa Blanca. The Senor 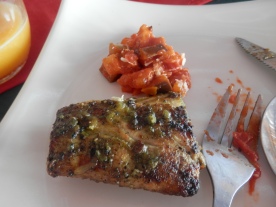 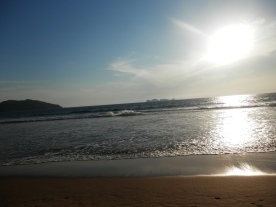 Waves that would suddenly shoot horizontally

was up for this trip,but struggling with sciatica pain so we choose to wait in the little restaurant for the truck.Several taxi drivers tried to get our business but we choose to wait for the far less expensive pasajera.  Well I think we got “Tom Sawyer-ed” as we were quite sure we could see from where we were when it  would turn around but we also thought either the man at the fruit wagon or the taxis might signal us.Secretly I think they told the driver to turn around and then told us it came and went.   No harm ! We took the taxi and got there just the same.  After some mango daquris which were so thick they were almost a meal in itself we had a delicious fish pronounced “wahoo”,  don’t know how to spell it correctly but it was very good with a side of ratatouille. The Senor seemed to be in a bit of a hurry to get back so we didn’t stay for the sunset, disappointing, but I try to understand his discomfort.  Every day is a good day, every day is an adventure here in Zihuatanejo. Signing off, KO

The Senor had purchased at sail fest a dinner for two with bottle wine and desert at LA Chula Vida.  Of course we had never heard of the place, but soon discovered it was on Playa Blanca, which we weren’t entirely sure where it was or how we would get there.  A little research paid off and we received several suggestions on how to get there.  The plan was to do a bus to the airport , and if the pick up with benches showed up we would take it, if not we would take a cab. Sounded simple enough.  Next we located where to catch the bus to the airport. convinced our friends Will and Sylvia we really knew what we were doing, and planned to leave about 4 as I wanted to be there for the sunset, and really didn’t know how long it would take to make all the connections.  Only waited about 5 minutes for the “colectivo” to the airport.which  is a van with benches along all sides and hand rails on the inside roof so an unlimited amount of people can be packed in. For 10 peso each we rode to the airport stop, not seeing a cab insight we sort of wondered … what next? There were two Mexican fellows sitting in the shade across the road so I got elected to ask them how to get to Chula Vida .  I was told in 5 min a collective would come. And sure enough it did but of the “pasajara” type, a covered pick up truck with benches. So for another 10

pesos we were on our way, this ride is truly air-conditioned as we were traveling quite fast as the road was empty except for one or two cars.

The ride was quite comfortable until we hit the dirt road and then it was very bumpy.  Along the way we saw some beautiful villas, stunning views of the ocean a restaurant or two and one condominium complex.  As we arrived at our destination we were greeted by a beautiful saddled burro which we learned later was the  “town mayor’s” transportation.

La Chula Vida has a tiled dining patio, both floor and roof and a beach bar palapa with table made from huge tree stumps.  Our hostess Lisette welcomed us and visited with us a bit and we learned that she hails from Woodland WA which is quite near us. We sat watching the sun go

down, cooled by very cold drinks and a lovely breeze from the ocean. One of the most peaceful relaxing places I have ever been.  We opted to eat our dinner on the patio as after dark the breeze was getting a little  too cool. The Senor and I had grilled”sierra” fish which was thick and moist, our friends had grilled shrimp which they proclaimed excellent. All served with a plate of grilled vegetables and followed up with a dish of almond ice cream. The setting was beautiful, the meal excellent, the company enjoyable, just can’t ask for more than that, definitely the sweet life, Chula Vida.

We had anticipated taking a taxi back to town, but Lisette said her husband Jorge needed to drive employee’s back to Zihuatanejo and if we didn’t mind waiting until dishes were washed he would bring us all home.   How is that for hospitality!  Of course we accepted.  I rode in the cab with Jorge who had an oldies radio station on playing  “All Shook Up” and “Good Golly “Miss Molly” sung in Spanish..  What a fun evening! Signing off KO