Simple translation I took an adventure to the whale celebration at the wild life refuge near Barre de Potosi.  Doyle had planned to stay in town to watch the play-offs, but I was going to tag along with our canadian neighbors and friends of theirs.  Well our neighbors didn’t feel up to it so I set out on my own to tackle the bus system and get my self 3o or so miles out to the Refugio.  As luck would have it I spotted my neighbors’ friends as they were heading out to the bus and tagged along with them. Riding the bus here is quite the adventure.  This was a big bus and along with the driver was a young man (think conductor but with out any of the class) the front door remains open at all times as he hangs out the door whistleing to attract attention and shouting Penta, Penta which is short for Pentalon the final destination. As he passes you wave if you want on and the bus stops, sometimes if it is a young person it comes to arolling stop and ther person jumps on the slowing moving bus.  To me that is quite a trick as  the step on the bus is equal to 3 steps up.  Not so easy for old knees to climb. There were no pig or chickens on this bus, but a man with a very large machete hopped on.  The blade was wrapped in newspaper and he was probably on his way to work.  We got off at a tiny village called Las Achotes and paid as we got off the equilvent of $1 for our ride, as it depends on how far you go.  We next walked into the dusty little village for the next segment of our ride in what I think is called a passajara, a big pick up truck with a canvas canopy and benches on each side.  The 3 of us were the last to get seats, 2 young men hung on the back bumper.  It was about 5 miles to the Refugio over a bumpy road but we arrive save and sound and enjoyed our vist, I managed to get a decent picture of one of the butterflies in the sanctuary. but since it was noonish most of the other animales were asleep The big event was becoming a “bone godfather” by buying a bone.  All the $25 small bones had been bought so I resisted, at least for the time being.  They have a complete skeleton of about a 70 ft sperm whale they are trying to have preserved and 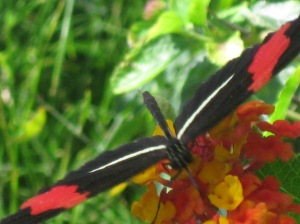 displayed permanently in it’s full 3 dimensional full form.  Right now it is wired together and displayed, but not yet museum quality.  That is what they are striving for and need to raise the money for.  There was plenty of good food at reasonable prices, tequila tasting and for gamblers frog jumps and chicken bingo.  It was a little hot on the dusty road waiting for the passajarra to return us to the village but the bus was there and we jumped on it for the return home.  Back in town we stopped at the “Flophouse Bar” for s cooling Margarita.  I then went to check on the ballgames progress knowing that Doyle would be a the La Playa Bar among many amigos.  Games wern’t over so I took my self out to dinner at “Agave”, an upstairs balcony restaurant and ordered my favorite cold avacado soup and some Guacamole with chips.  Can’t think of a better meal and I now have a recipe for it. Just another day in paradise where the weather has remained a steady 80 degrees.  Signing off KO