Yesterday the Senor and I went to Las Gatas Beach. We take a water taxi to get there, while it is not an island it is most easily accessed  by water. Now that my knee has completely healed it is much easier getting on and off the boat. Last year it was a bit of a challenge. I’m always thankful for the young men who are there to help and we tip generously.  We went to the same beach restaurant we did last year, but the Senor’s favorite waiter wasn’t there, the food wasn’t very good.  But they did make killer margarita’s.

More on that later. My snorkel mask’s frame broke, but the senor said he thinks he can glue it back together so I rented one for the day. No sooner than we got there than I realized not only had I forgotten my mango drink powder that I have become addicted to but also I had not packed my swim scarf.  I can’t swim with out something on my head or I would burn to a crisp. So I had to buy a big scarf and fold it up

many times before I could tie it on, but it worked.  I was just out of luck with my powered drink mix.  I’ve learned if I drink 3-4 bottles of water each day I don’t get leg cramps at night. But I hate plain water, so I flavor it with a non calorie drink mix. I brought some from home, but have found a great mango flavor here that  I’ve also acquired a swim shirt.  I swam out past the reef which was teeming with fish some in large schools that you swim right through. We ordered fish fillet in garlic which we share and fortunately it came with chips and guacamole as the fish was dry. I had a margarita with my lunch, went out for another swim came back and had another margarita while we watched this young man shoot up out of the 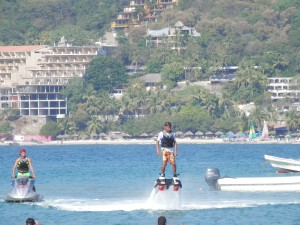 water on this jet pack until he was 20ft in the air.  It is powered by a hose from the jet ski behind him. Looks interesting, but I’m sure it would take more balance than I have.

I’ll be content to be a spectator. One more Margarita and back to the apartment where I have a crock pot of ribs waiting for the Senor.

I had a bit of trouble navigating back to the apartment, but once there safe and sound, well you know the old saying one tequila, two tequila, three tequila floor.  Well that is exactly what happened I fell flat on the floor, slit my lip and woke up to a black eye.  I will look lovely at the M-Dock concert tonight.  Lessons learned, don’t go the beach with out making sure the bag is fully packed, head scarf and mango powder included.  Never more than 2 margaritas.

One thought on “ON THE BEACH”